Once upon a time there was an exasperated little girl who wanted nothing more than for the Danvers-bound addlepates around her to recognize that while on the outside she was a grubby, dirt-munching little scrapper who may not have brushed her hair for three solid weeks, inside she was a cotton candy scented pink princess politely knocking on the door with her fairy wand, waiting to be let out.

I have a sister 14 months my junior who has, from birth, been a vision of such feminine loveliness that the natural result in someone of an alternative persuasion (in literally every department from looks to beliefs) such as myself was, is, and always will be, involuntary retching.  As a child, she photographed like a china doll and behaved like a minion of Loki.  I introduce you to this paragon of Hellenistic beauty because she plays a major part in my story of pre-adolescent injustice. 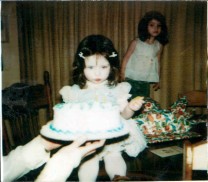 While still toddling my sister and I were dressed identically on a regular basis.  Especially on holidays and Halloween was no exception.  One year, there were two lovely satin clad butterfly fairies and the next year BLAMO! Prima Ballerina and Drum Majorette.  Prima Ballerina had a pale pink tutu with a starchy silk bodice that made whispery crackling sounds when you ran your hand over it and a stiff “powder-puff” style skirt of net and tulle.  (check out this cool page for more info on Tutu design and history http://www.classacttutu.com/hints-history-of-tutus ) Drum Majorette wore a disco gold leotard with red braided epilates and white satin detail.  The costume was completed by high white boot covers and a baton.  (please don’t infer that the costume was anything other than darling, mother had eccentric tastes and what she chose was always unique and mostly spectacular) 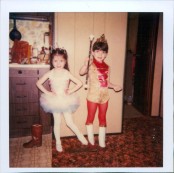 Now you may be thinking, “what’s wrong with a Drum Majorette, that costume is adorable!” [retch, retch, retch]but let me assure you that to a repressed princess in a tomboy’s body it was a message that Prima Ballerina was in the feminine club and Drum Majorette was firmly in the tomboy camp – NO COLORING OUTSIDE THE LINES!

Then elementary school began and DP’s “oh, what fresh hell is this?” became the battle cry of a struggling, awkward little alien who never could seem to do anything right.  School was a mentally, physically, and emotionally exhausting enterprise for me, but more on that in another post.  What really became the dollop of horseradish on my sundae of manure was the Halloween “costume parade” which consisted of a seemingly never ending line of elementary classes marching in a circle around the school parking lot (seriously, I cannot figure it out either) over and over and over and over to ensure that the parents who bothered to show up got as many wretched photo-ops as possible since in those dark ages of technology getting a picture of a moving child without a missing limb, smile, or head was a feat worthy of braggadocio.

The Year of the Great Tragedy, my sister and I were in the same school and so our classes would perform the humiliating Halloween asphalt death march together, at least I wouldn’t be alone.  I was filled with elation and anxiety as our mother announced that she had our costumes ready, this would be my vindication! After a half a year of desperation and loneliness fueled by the rejection of my peers, my day had finally come! My mother’s creativity and eye for detail would guarantee me a costume of such uniqueness and charm that no one would be able to resist a place at my side! I would be “Queen for the Day”.  My sister and I jumped and danced around the room with glee, though I have no idea if she was suffering from similar woes, was caught up in my excitement, or simply loved seeing stuff come out of brown paper bags.  Mom pulled from behind her back a pointy crown as tall as Abe Lincoln’s top hat and covered in tin-foil, a matching wand with a star at the end followed.  These items were homemade by mom, btw and very cool.  “You’re going to be Glinda, the good witch of the North!” she crooned excitedly at my sister, who squealed with delight as Mom pulled a perfect pink tulle skirted (sensing a theme here, people?) gown out of her brown bag.  I was jazzed; Mom really seemed to be on the right track this year! What could be lurking in the bottom of that brown bag? A Dorothy costume perhaps, complete with red sparkle shoes the likes of which no one at Adams Center Elementary School had ever seen?  As Mom reached into the bag and began to draw out the first piece my anxiety and expectation soared to echelons nearing apoplexy –  in the background my sister was already stuck head through arm-hole in her stunning new gown – and finally there it was… my perplexity momentarily stilled the anxiety that was running rampant, what was going on here? That outfit is … green?

I waited for her to pull something else, anything else, out of the pathetically wilted paper bag … nothing came.  “Look here!” she said to me, with obvious delight, as she laid out the outfit for my perusal, “Isn’t it the most beautiful costume you ever saw?” I, slowly and with great trepidation, walked over and peeked at the truly gorgeous, made with obvious skill and care, Peter Pan costume.

PETER FREEKIN PAN? Darling baby sis is our hero, the angelic and wondrous Glinda, and I am the naughty little boy who never grows up.

Well, as you can imagine the parade was a nightmarish whirl of fairies, princesses, ballerinas, and me.  I was mulish and sour and my candy turned to ash in my mouth.

After this I cannot remember another Halloween costume I wore (I literally cannot, I believe strongly that I must have blocked them out, I even searched for photos to try to find some more or jog my memory to no avail) until 7th grade.  That was a disaster of such epic proportions that it deserves its own story so we will put that one on the shelf for now and just say that high school and early adult Halloween celebrations meant a time of rebellion for me, I was a slutty “insert your favorite cliché here” everything you can imagine, as well as Madonna, Cleopatra (that one was amazing thanks to a loner from my, to this day, Halloween loving mother), a Charlie’s Angel, and even one year Elphaba in a silent middle finger of justice to the Year of the Great Tragedy.  (Thank you, thank you, Gregory Maguire; you will never know the depths of my gratitude)

A few of my Halloween Follies… in order of appearance: Charlie’s Angel, makeshift Madonna, Cleopatra, Elphaba…

Finally, in my “adult” life (I use this term loosely because I am nothing close to an adult) I have settled down to costumes for fun rather than for vindication.  I am Princess Leia quite often (and if you don’t get this reference STOP READING MY BLOG IMMEDIATELY and go fix your damage) though this year, since my wig had a catastrophic mishap, I am going as Angelica Teach and not because of the sexy pirate wench costume, but because I get to have a big sword.

Also, in the interest of being honest, last year I made my baby daughter dress as Yoda while my older daughter dressed as the Monster High fashion savvy werewolf girl, this year my husband and I chose a velvety green dinosaur costume for my youngest, while my older daughter is going as the (ugh, again?) Monster High version of Cleopatra.  Don’t think that the tragic hilarity of this is lost on me…